As my self-imposed quarantine ended Friday evening with no temperature or symptoms, I volunteered to feed at the barn Saturday morning, figuring I'd get there nice and early and settle the horses then hop on for my first ride of the year. My friend Lauren had someone coming to try her horse as well, so I figured I'd stick around and assist if needed. 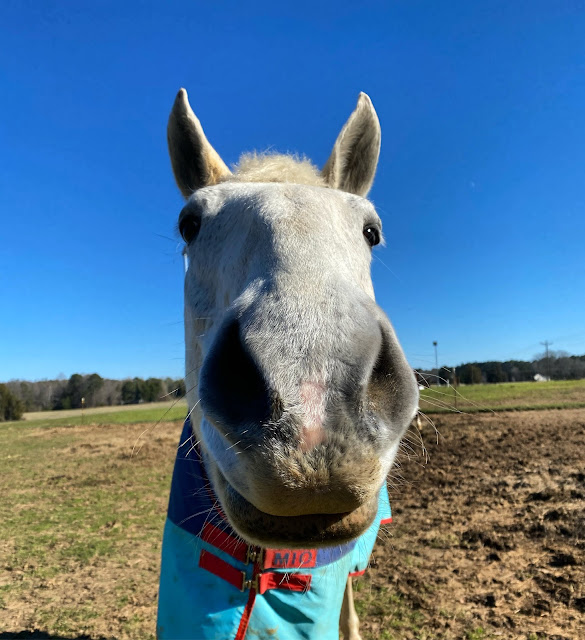 So, keep in mind I was just in Vermont for a week. South Carolina where Goose lives was colder than it was while I was in VT (which to be fair isn't saying much since it was in the 40's while I was there). Y'all, I froze. Am I a real southerner now?

I woke up and it was around 22 degrees here. I bundled up, threw the labs in the car and got to the barn where everything was frozen. First things first - I grabbed the heavy shovel and broke all the troughs. Then I soaked everyone's meals for about 10 minutes, and got to feeding. Usually we pull blankets in the morning since the temps rise pretty high during the day, but it was so cold I figured I'd leave most of them if they felt comfy in what they were wearing, only a few horses with double layers got a rug pulled immediately. My hands were already frozen and I was wearing my heaviest barn gloves which definitely aren't heavy enough as they're only lightly insulated. I'm unprepared!

I went to try the water, and it was frozen at the hydrant. Hoses frozen, coupler frozen, hydrant frozen. My northern brain got really frustrated for a minute because why oh why didn't we disconnect all hoses and wrap the hydrant overnight?! Then again, it so rarely gets this cold and with our BM away it just wasn't thought of. No worries, I'll thaw it. I dragged everything into the sun, finally got the hose attachments unhooked from the hydrant and hoped the sun would help over the course of a few hours. Luckily everyone had enough water in the meantime, but it was well into the afternoon before I could top up the troughs, ugh.

After I got everyone organized for the morning, Alyson and I hopped up for a quick jaunt around the front field. When I had gone to the field earlier, Goose had straight up galloped away from me. Gee, thanks buddy what a welcome home. I think he's actually a cat and totally holds a grudge. When I went back out later, he galloped TO me, so that was better. We tacked up quickly and headed out. Tammy had been riding him while I was away so he was clearly well taken care of, but I know he acts up for me and would likely never for Tams. To my delight, he was perfect as we slowly meandered around the front field, just catching up and letting the boys stretch. After a half hour we were thoroughly frozen and headed back in.

I hung out for the majority of the day and caught up with barn friends and watch Lauren excitedly close the sale to send her horse to the actual most perfect home for him before she welcomes her baby in a few weeks. It was a long, cold, wonderful barn day.

Sunday dawned sunny and significantly warmer, with the temps rising into the 50's by 10am. I got to the barn and no one was there, so I grabbed Goose, spent some time grooming him, and threw tack on. Tammy texted me welcoming me home and asking how Goose was, and I mentioned we were about to head out on a relaxing ride. That was my first mistake.

The way our barn is set up, we have an electric fence gate that separates the "human area" with our tack up spots and buildings from the driveway which leads to the front field. All the trailers are parked in the driveway, so usually I let Goose and myself through the gate and hop on at one of the trailers to ride out front. Goose is old hat at this, and usually lines himself up. Sunday, however, he was dancing all over the place, which was my first indication that this ride may not go to plan. Eventually he lined up enough where I could swing aboard, and off we went.

A few times a year, Goose has a wild day. When that happens, I usually get off and lunge him or just put him away - he's not four, he's not going to learn anything from me working him through it, he just had a ton of energy and his marbles aren't sparking safe and good ideas. I don't hold it against him - sometimes you just have to lunge the beast and try again tomorrow. Yesterday, however, I wanted to see if we could work through it. As we walked to the front field, I stuck to one grassy side of the driveway about the size of an arena. He felt Up but not too bad, so I figured I'd try to walk the whole field. As I asked him to cross the driveway, he balked, squealed, and dropped his shoulder to spin away as I added leg. Oh delight.

I sat with my thoughts for a moment, and decided that I'd give myself ten minutes to try to make this better. If at any point it wasn't working, I'd simply get off by choice rather than by him flinging me off. I didn't need to be a hero, but I wanted to see if I could find some tool to help me here. It was a bit windy, but warm, and he was also by himself which he doesn't usually mind but it's winter and everything is worse in winter.

I started by turning him every time he refused to go forward, so we drunkenly meandered for awhile until I could put some leg on without him balling up. He still felt like he was about 20 hands high at this point (he always feels like he gets taller when he's like this, he's only 16.2) but it was progress. I kept him to the smaller grassy side of the driveway and slowly asked him to bed, using my seat to push his walk forward, and then bring it back to a crawl. We played with this for awhile and before long, 15 minutes had passed and he'd taken a few deep breaths. Good boy. I started asking for loose leg yields, moving his haunches, backing off slightly any time he balled up and readdressing it in another spot as we walked around. He had foamy lips and was listening and when I asked for a trot off my seat, he picked up a slow, methodical trot that he kept in both directions without any of the nonsense he'd had earlier. Throughout all of this, I was talking to him, telling him good boy, and patting him when he did something he hadn't wanted to previously. We took a walk break, trotted once more, and then I loosened my reins and we walked one lap of the field, quietly on the buckle, before heading in.

It wasn't much, but I'm so proud of him and of me. Giving up when he first balked at the driveway and squealed would also have been an appropriate response - I was alone on the farm, and he is a big horse with a nasty spin and buck when he's like this, but I didn't want to lunge him on the not-so-great ground and risk his legs. This was the first time in the nearly ten years I've owned him I've really been able to work him through a "bad day" and I'm so pleased! He's older and wiser and it seems so am I.

Sorry for the boring, media-light post but I wanted to document this for my future self. Hope everyone's first rides of 2022 are off to a good start! 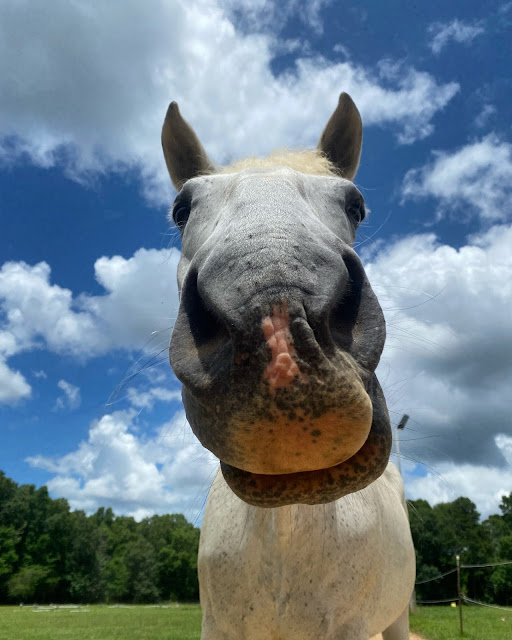 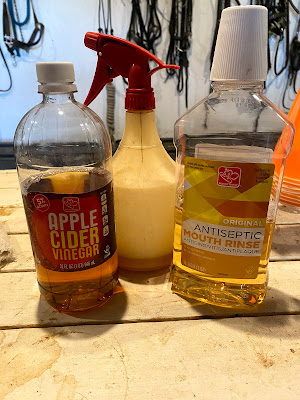